Tottenham Hotspur are prepared to help ‘facilitate’ the transfer of Marcus Edwards to Sporting this summer, report A Bola on Sunday.

The 22-year-old moved from Spurs to Vitória de Guimarães in 2019, and has done enough in Portuguese football to catch the attention of bigger sides.

Tottenham secured 50% of the value of a future sale, when they allowed the attacker to move to Portugal on a free transfer. At the time, Spurs thought it was the best way to secure money from Edwards, who has represented England at every level to U20.

Sporting and Vitoria would have found it difficult to agree a deal if 50% of the fee was going to Tottenham. So, the Lisbon club contacted Spurs to agree that Tottenham would continue to have a big percentage of a future sale, this time cashing in when he leaves Sporting. 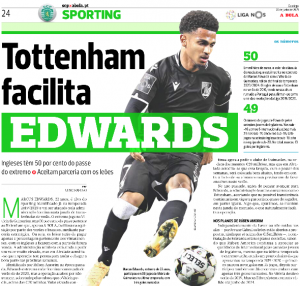 That doesn’t sound like a bad idea for the Premier League side, given Edwards’ age, that he’s English, and Sporting’s record of developing talent.

A Bola say Tottenham ‘accept a partnership’ with Sporting for the player’s future transfer.