Just a few days ago, the Italian media were claiming that Juventus defender Radu Dragusin is a target for the likes of Tottenham Hotspur and RB Leipzig.

Since his contract with the Old Lady expires at the end of the season, the clubs are said to be watching the situation, able to start talks immediately for a free transfer.

Now an update on Dragusin’s situation is brought by Italian newspaper Tuttosport. They claim that besides Paulo Dybala’s contract, Juve are also working to give the centre-back a new deal.

The outlet points out that now featuring for the first team, Dragusin had performances that not only impressed the Old Lady, but other clubs as well, with RB Leipzig taking the lead. 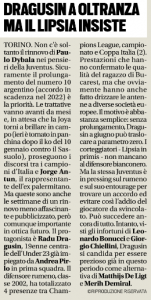 Juventus are said to be pressing Dragusin and his entourage so he can sign a contract before any other clubs get to him. There’s currently a special need for him in the team following the injuries to Leonardo Bonucci and Giorgio Chiellini.

With the 19-year-old taking so long to accept the renewal, it’s probably fair to say he and his agents are evaluating the scenario before taking any decisions.

Tottenham would already be able to sign a pre-contract with him in case he wants to, but the situation seems a little more complicated than that.

‘Without forgetting Newcastle’ – Signing ‘on the table’ for Magpies, would rock world football

Everton have made ‘polls’ for midfielder – Nothing ‘concrete’, wages a...

‘Without forgetting Newcastle’ – Signing ‘on the table’ for Magpies, would...

‘Logical’ for Man City to bet on player – One factor...