Last week, reports in the Catalan media suggested Fernando Llorente of Tottenham Hotspur has been identified as one of the striker targets for Barcelona in the summer transfer window.

It was explained the La Liga winners were impressed with his decisive performances against Manchester City and Ajax in the Champions League.

His contract with the north London side expires on June 30th and so far, the former Swansea City man has not committed his future to his current employer.

Tottenham face Liverpool in the Champions League final in Madrid this weekend and Mundo Deportivo sat down for an interview with the Spaniard.

When asked if he will leave as Spurs have not offered him a renewal yet, Llorente said: “Now I do not think about my future.” 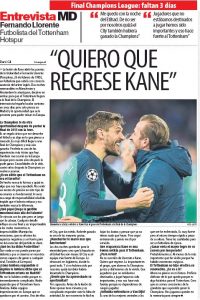 “I prefer to enjoy what remains because it is historic for Tottenham. I think we are not aware of the greatness that it would be to win the Champions League.”

A failure from Mauricio Pochettino’s side to tie Llorente down to a new deal will see the 34-year-old leave the club as a free agent.