Back on Saturday, when Mesut Ozil was left out of Arsenal’s team that would face West Ham, the Gunners claimed that the player was ill.

But João Castelo Branco, who’s a correspondent for ESPN Brasil, had other information. According to him, there was a row between the midfielder and Unai Emery in training. When Ozil learned that he would be on the bench for the match, he ‘decided not to be at the game’.

Castelo Branco had the chance to speak to Emery after the match. After a few questions about the game, he approached the matter, and the manager was quick to dismiss it.

“Information? No, because it is a lie, of course. It’s not true at all. He was here. Yesterday he was bad and we thought that it would be better for him to rest because he was not in conditions and the doctor also did not authorise him.” 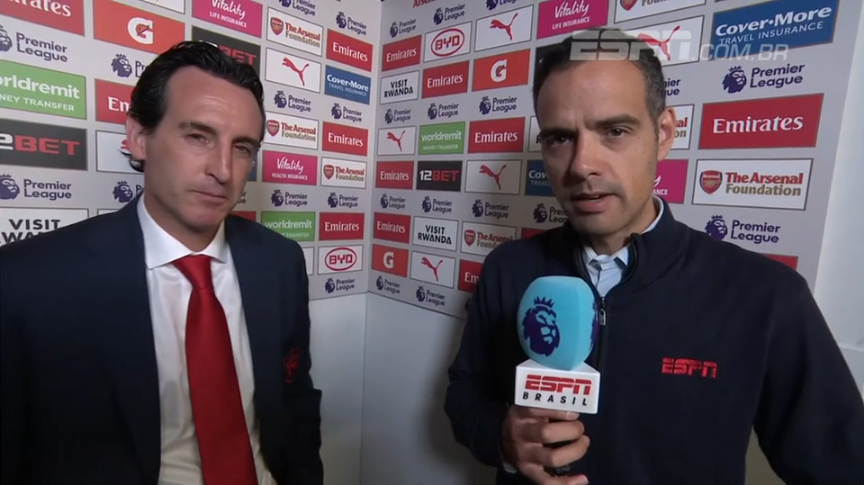 But Emery was clearly uncomfortable with the question, and confronted the claims a little more: “I found the question and the information strange, I don’t know where they can come from, they are totally lies, so I tell you.”

So Castelo Branco claimed that his sources were from close to the club. Emery answered: “No, that’s a lie. I assure you not to.”

Most of what happened has been reported by Castelo Branco on Twitter. That’s where he got abuse from some Arsenal fans, who claim that if Emery said there’s no problem, he’s the main source, no matter how many people has the journalist heard.

But the official version is not always right, especially in controversial situations like this.

João Castelo Branco has been ESPN Brasil’s most important correspondent for years and never needed to break controversial news to be successful. Most of his work is about interviewing players and managers, which he does pretty well. Making up stuff is not something he needs, even because Brazil won’t exactly be shocked if Ozil and Emery had a fight.

So that’s a guy worth listening to, regardless of official versions.