The UK government has announced stricter quarantine rules for Denmark after a new strain of Covid-19 was discovered in the country. With worry about the outbreak, which is thought to have started at a mink farm, tougher quarantine has been put in place and that impacts the current international break.

As it stands, footballers at UK clubs are unable to travel to Denmark to be part of the country’s squad, and Swedish internationals face a similar situation relating to an upcoming friendly between the two countries.

Following Spurs’ 1-0 victory over West Brom on Sunday, Jose Mourinho seemed to state Højbjerg will miss the first two matches of the international break. The midfielder won’t be available for the friendly against Sweden, due to the quarantine rules, and is then banned for the Nations League match against Iceland.

Denmark then face Belgium in another Nations League match, and with that being away it’s been assumed UK-based players can travel directly to Belgium, thus avoiding quarantine.

There’s still questions around this, because they’d then be mixing with others who had been in Denmark, and over and above that, the country’s FA are trying to agree some 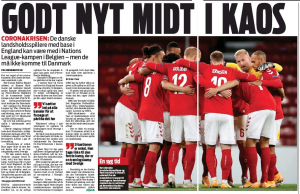 kind of exception to the rules.

Ekstra Bladet state: ‘DBU has contact with both the English Football Association (FA), the Ministry of Foreign Affairs, the Danish Embassy in London, and UEFA.’

Should they succeed with that, then Mourinho may not have Højbjerg at Tottenham’s training base for as long as he’d have liked.