The winger’s current deal with the La Liga side is until 2021 and his desire was to continue at the club.

It’s claimed negotiations between the two parties for an improved contract have been stalled for a long time.

Valencia need to raise funds to stabilise their economic condition, which will become even more worse after they have failed to qualify for the Champions League.

The sale of the 20-year-old would help them improve their financial situation.

Juventus presented an important offer to the Spaniard, while Real Madrid and Atlético Madrid asked about his situation. However, the Citizens are believed to be ahead in the chase because Torres’ plan is to play under the orders of Pep Guardiola.

The attacker needs regular playing time to continue his development and believes a move to the Etihad help will him achieve it.

According to the report, City have a ‘total agreement’ with Torres as they have decided to bet on his signing.

The agreement is only between City and the player, and the club need to agree a deal with Valencia for the transfer to take shape.

If there’s an agreement, Eurosport state the deal will be made official in the coming weeks and the wideman could be the first summer arrival at the Etihad.

Today’s edition of AS also claims Torres ‘falls in love with City’ and is ‘very close’ to signing for them. They add the negotiations have ‘come a long way’ in recent days, but the Spain U21 international has not yet given a ‘definitive yes’ to Guardiola’s side. 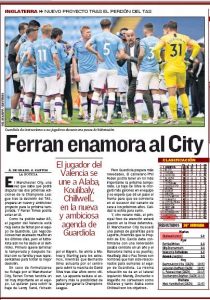 Torres wants to wait until the season is completed, after which he will talk to his family and agent to decide what’s best for his future.

Should he sign for City, AS expect him to have an important role in the team and also become Leroy Sané’s successor at the club.