Manchester City and Sporting have reportedly found ‘total agreement’ for the transfer of Pedro Porro to the Lisbon side.

Portuguese newspaper Record says the negotiations had important developments over the past few hours and the move is now very close to being made official.

It’s claimed that Porro is moving to Sporting on a two-year loan deal, and the Lions will be able to make the transfer permanent by triggering a €8.5m clause. .

The amount for the buying option had been the biggest issue during the negotiations, and that’s why Record believes the move is so close now. 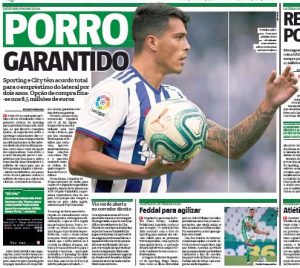 Record highlights the fact that Manchester City and Sporting currently have a very good relationship, and a proof of that is the Lions aren’t paying a fee for the loan.

Manchester City spent €12m to sign Porro from Girona only a year ago, immediately sending him out on loan to Real Valladolid.

In case this move to Sporting is confirmed, the Premier League side will have lost money without even testing the right-back in Pep Guardiola’s team.