On Wednesday, Corriere dello Sport provided an update on the Maurizio Sarri to Chelsea situation, explaining there was ‘healthy realism’ that a deal could still be sorted.

The former Napoli manager’s hiring still rested on Roman Abramovich’s decision to either keep Antonio Conte around or sack him, which would be rather costly for the Russian oligarch.

Should he decide to do so, Il Mattino on Thursday believe the next step would be extremely easy, as there are no ‘hiccups’ between Chelsea and Sarri because the agreement between the two parties is ‘total’ since May 29th.

Furthermore, the local Naples newspaper reveal that should the manager sign his contract with the Blues, then Aurelio de Laurentiis will not stand in his way, and ‘a way out of the club will be found, one way or another’. 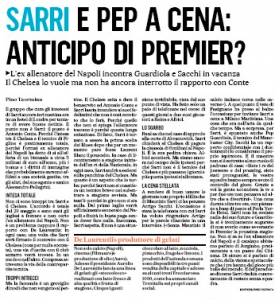 Come July 1st, Sarri will officially be sacked, but will still be on the payroll, without anything to do.

Were he to eventually sit in the Stamford Bridge dugout, his first port of call would be to get the Blues to trigger Raul Albiol’s €6m release clause, which is a transfer the Spanish defender would accept.

It’s certainly promising news for Chelsea, but, once again, until Antonio Conte is told to go elsewhere, this means very little.

Player speaking ‘regularly’ to Jurgen Klopp on the phone – Liverpool...