Home Europe ‘Top Secret’ report explains why player said ‘no’ to Barcelona despite their...
SHARE

Pedro left Barcelona for Chelsea in 2015 as the La Liga winners decided to go with Lionel Messi, Luis Suárez and Neymar as the first-choice attackers for the 2015/16 season.

The Spanish champions’ former technical secretary Robert Fernandez was looking to bring in a top quality attacker, who had the ability to play up-front or in the wide positions.

Fernandez travelled to Düsseldorf with his assistant Urbano Ortega, where he met the Borussia Dortmund star’s agent and father.

The German international also attended the meeting, during which the former chiefs of the Catalan club showed their interest in signing him and also asked Reus what he thought of their offer.

Reus’ intention was clear that he wouldn’t join them if he was not going to be a starter. He wanted regular playing time, like he did at Dortmund and didn’t want to risk being a substitute in the shadow of Messi, Suárez and Neymar. 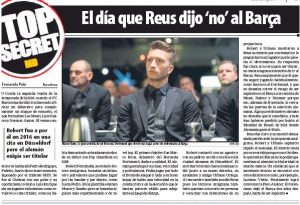 Reus said ‘no’ and Mundo states he ‘was clear and showed no passion for the Barca proposal’.

Barcelona ended up signing Paco Alcácer in 2016. He struggled to get regular playing time and left the Camp Nou for Dortmund in 2018.

Chelsea player says Tottenham ‘asked’ for him in January – Made...

West Ham man claims players will need a month to get...