Ansu Fati has been a revelation at Barcelona this season as the 16-year-old has managed two goals and an assist in five league appearances.

Two months ago, the winger signed a contract that will keep him at the Camp Nou until 2022.

Earlier this month, we relayed news from Spain that several clubs including West Ham were interested in the teenager. It was also explained that Barca academy director José Mari Bakero played a key role in convincing the youngster to sign a new deal.

A ‘Top Secret’ report from Mundo Deportivo now explains there was ‘tension’ before Fati signed a contract. Having considered securing his future as a priority, Barcelona had a verbal agreement with Fati’s father over a new deal.

But the situation changed after the attacker scored a brace against Chelsea in the UEFA Youth League semi-final.

Fati took ‘advantage’ of the ‘two goals’ he scored against Chelsea and his father broke an agreement which he had with the club. He wanted Barca to convert the gross salary which was initially agreed into net wages. 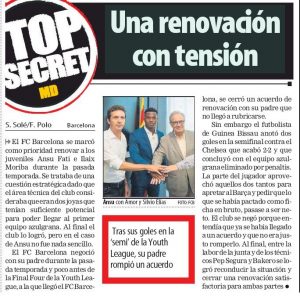 Barcelona refused to meet these demands and felt it was unfair from the player’s camp to break the agreement.

However, with the help of Pep Segura and Bakero, the situation was resolved and the final deal agreed was satisfactory to all parties.