Since it became known he’d be leaving Barcelona, Raül Sanllehí has been linked with a string of Premier League clubs.

The kudus of having worked at Barca seems to have provided Sanllehí with a variety of opportunities, regardless of whether he’s actually done well in the position over the past few years.

Arsenal have been one of the clubs linked, and now Catalan newspaper Sport present it as a sure thing. In their Wednesday edition and tucked into the ‘Confidencial’ section, Sport claim Sanllehí will become Arsenal’s Director of Operations. 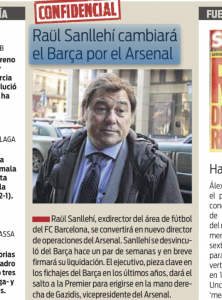 That sounds slightly different from a Director of Football, but surely the nuts and bolts would be pretty much the same. Sport say Sanllehí will become the right hand man of Ivan Gazidis.

Sport really do push this across as a done thing, rather than a rumour they’ve picked up. Of course, that certainly doesn’t mean it’ll happen, but there’s confidence at the newspaper that Sanllehí is going to turn up at Arsenal.

Sanllehí wouldn’t come with a great endorsement from many Barcelona fans, who believe the team has continued doing well in recent years in spite of what’s been happening behind the scenes, rather than because of it.