With Ajax star Matthijs de Ligt still not confirming where he will play next season, Barcelona decided to look to alternatives in the transfer market.

On June 26th, Mundo Deportivo reported the La Liga winners contacted Manchester United several times for Victor Lindelof, but the Red Devils turned down the approaches from the Catalan club.

A ‘Top Secret’ report from today’s edition of Mundo Deportivo now claims the Red Devils have asked about Samuel Umtiti as they have again become interested in his situation at Camp Nou.

A knee injury forced him to miss a lot of the 2018/19 season, and instead of going under the knife the France international opted for more conservative treatment.

The former Lyon star lost his spot in the starting lineup to compatriot Clement Lenglet, who formed a partnership with Gerard Pique in the heart of the back four.

It’s stated Manchester United were keen on acquiring the centre-back’s services last summer, before he signed a new contract, and they have rekindled their interest in the defender.

The club ‘ask questions’ about the signing.

However, Umtiti has publicly ruled out a move and the La Liga winners’ official stance is the player is non-transferable.

The official stance of Ole Gunnar Solskjaer’s side and the Spanish champions is that both players are non-transferable, although if the interest persists from both parties in Umtiti and Lindelof, there is a possibility of an operation involving the two defenders. 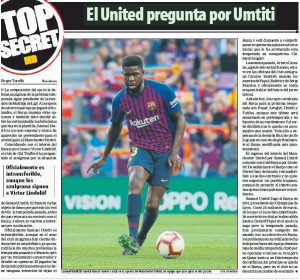 One of the areas Solskjaer wants to strengthen in the summer transfer window is the centre-back position.

Allowing Lindelof to go, to then bring in Umtiti, especially considering the latter’s injury, may not be a good business for United.