Clement Lenglet arrived in Spain when he signed for Sevilla from French club AS Nancy last summer. In his debut season, the centre-back has made more than 50 appearances in all competitions, which includes only two substitute appearances.

The 22-year-old has been a standout player in Sevilla’s defence and his impressive displays have seen him attract interest from Barcelona, and the La Liga winners are keen on signing the defender this summer.

In their ‘Top Secret’ section, Mundo Deportivo explain how a two-legged clash between Sevilla and Manchester United convinced the “technicians” of Barcelona that Lenglet could be well suited in their defence, if they sign him.

Sevilla knocked Jose Mourinho’s side out of Europe’s elite club competition after registering a 2-1 aggregate victory in the round of 16. The first leg in Spain ended in a goalless draw, while a victory at Old Trafford was sufficient for Sevilla to make it to the Champions League quarter-finals. 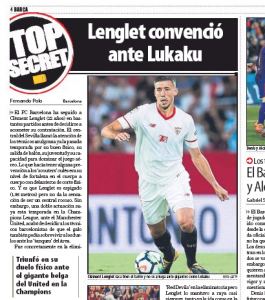 Lenglet was one of the star performers against United, where he came up against Romelu Lukaku. The Belgium international, who is 1.91m tall and weighs 94 kg, was kept quiet for the majority of 180 minutes of football played over two legs.

The Frenchman’s overall game against United in both the legs was a “litmus test”, which was sufficient to convince the Barcelona analysts that Lenglet has all the attributes to play for Ernesto Valverde’s side.