Everton could make a move for PSV Eindhoven star Denzel Dumfries before the European Championship to avoid increased competition for him.

That’s the hint from De Telegraaf today, who say that the ‘time seems ripe’ for Dumfries to make a move away from the Netherlands.

The right-back was linked with a move to Everton last week, with it long established that the Blues are chasing a new right-back this summer.

The interest in Dumfries comes via Director of Football Marcel Brands, who is said to be a big fan of the Netherlands international following his time in charge at PSV.

He’s currently with the Netherlands squad planning for the Euros, and De Telegraaf cover that today on a piece about whether players will sort their futures before the tournament.

On Dumfries, they say that despite having a contract until 2023, he’s making such good progress that the ‘time seems ripe for a nice transfer’.

The fact Everton are interest is a ‘confirmation of his good development’, but it remains to be seen when they make their move.

The newspaper questions that Everton could be waiting to see how he does during the Euros but then wonders if Brands is ‘already convinced’ and wants to make his move now before there are more interested parties. 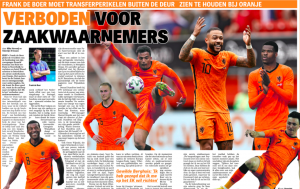 What may make things tricky for the latter is that the Netherlands have swapped camps, going from the open Huis ter Duin to a remote hotel in Zeister Woods.

That hotel ‘is inaccessible to unauthorised persons’, meaning agents are banned and can’t meet with their clients to discuss transfers etc.

That makes things slightly tricky, although at the minute, it seems nobody knows when Everton will make their move for Dumfries, just that they’re interested in him.