Even though Lucas Piazon has moved to Portuguese side Rio Ave on a loan deal, it seems he’s not really keen on returning to Chelsea at the end of the spell.

The player has given a two-page interview to newspaper A Bola, and he makes it pretty clear he wants to settle down for a reasonable period this time.

“My idea, actually, was to leave Chelsea for good, but that didn’t happen,” said the Brazilian, who has signed a two-year contract with Rio Ave.

Asked if Chelsea are now a ‘turned page’ in his career, Lucas Piazon confirms it’s his wish.

“Yes, I think so now. Football changes a lot overnight, but today, in the face of all this, I think it’s a page turned.” 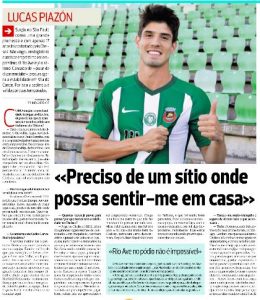 Lucas Piazon joined Chelsea in a move from Brazilian side São Paulo in January 2012. Since then, he’s had loan spells at Malaga, Vitesse, Eintracht Frankfurt, Reading, Fulham, Chievo and finally Rio Ave.

And with only three official appearances for the Blues in all these years, Piazon is pretty convinced he’s not getting new chances. That’s why he now pushes for a permanent move.

“I’ve been at Chelsea since 2011, I’ve been on loan almost all over Europe. I’m tired of playing here and there, I need a place where I can feel at home. I want to know that in July I will return to the same place, to the same house. Being moving all the time is very complicated. 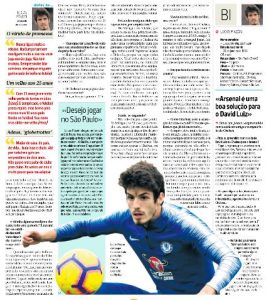 “Playing at Chelsea is hard. In addition to the big players who are often signed, there’s also the pressure to put the younger and best players from the academy, which is no longer my case. It didn’t make much sense for the club to get me playing, especially at a time when they made €100m signings and also had a lot of house talent coming up. My time at Chelsea is over. I’m 25, I’ve been on loan several times.

“I’d have a good season on loan, but I’d come back and was soon loaned again. There was no point in going out on loan, playing well, coming back, not being used and being loaned again. There comes a time in your career that makes no sense anymore. By the way, I said exactly that three years ago and it didn’t go so well at Chelsea, it generated some discomfort.

“I can’t just blame Chelsea, because I also accepted all that. But of course, there came a time when I thought that being loaned again would no longer be necessary, I had to go on with my life.”
Lucas Piazon has a contract with Chelsea lasting until June 2022, which is a year after his loan to Rio Ave ends. At the end of the temporary spell he’ll be 27 years of age, and, unless anything changes, still be contracted to return to Stamford Bridge.