Just one point above the relegation zone, the Baggies have come under a lot of scrutiny, with their manager even admitting he was under pressure this season, far more than in the past.

With 10 points in 11 games, and just nine goals scored, something isn’t clicking at the Hawthorns, and Marca in Spain point out it might have something to do with their passing. 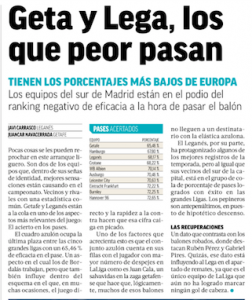 While there are always anomalies in football, the basics dictate that a team who can pass the ball relatively well and accurately has a better chance of creating chances.

Long ball tactics certainly have a part to play in this, and it isn’t surprising to see that West Brom are currently sixth in the Premier League in that department, with 764 attempts.

One could also point towards the switch to Jay Rodriguez as the main striker, instead of a target man like Salomon Rondon, as a reason why the long passes aren’t finding their man, and, with this in mind, you won’t be shocked to learn West Brom have the lowest percentage of possession in the league (40.3%), as per WhoScored.

Add that to fourth worst average of shots per game (8.7) and the fifth fewest key passes (6.5), and a trend starts to appear.

While the club finished 10th last season, the run of two draws and seven draws in their last nine games suggests they could have easily finished in the top eight meaning whatever was working previously at the Hawthorns isn’t anymore.

Pulis refuses to blame the players, who ‘work hard’, suggesting he is the problem.

Look at Stoke: following five seasons in the bottom half, a switch to Mark Hughes saw them finish 9th three years on the trot.