We should have seen it coming, and we’re quite frankly kicking ourselves we didn’t the moment Kieran Trippier to Atlético Madrid was done.

Alessandro Florenzi to Tottenham is now a thing. It’s not a big thing, but it’s definitely looking like it could become one over the next few weeks.

Both Gazzetta dello Sport and Corriere dello Sport have something on it in their daily newspapers, and at the moment of writing this very line, we haven’t checked either Il Tempo or Il Messaggero.

That’s for later on in this article.

We’ll start with Gazzetta, who claim there is a ‘courting’ from Tottenham for the right-back regarding an ‘operation in which could be even inserted Toby Alderweireld’.

Of course it could. Why wouldn’t it? 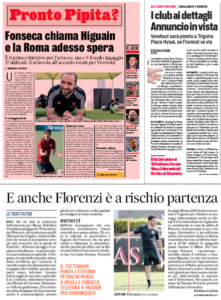 If this actually takes place, then Roma would turn their attention to Napoli’s Elseid Hysaj.

As for Corriere, they have a similar claim, reporting Spurs have made an enquiry for the 28-year-old, also echoing Gazzetta’s stance about the Albania international being the potential substitute.

Il Tempo have absolutely zilch on it, but Il Messaggero make up for that, as they corroborate Corriere by referring to a ‘timid’ enquiry from Tottenham.

So, we’ve got three outlets confirming there has been some movement, but it’s been minimal.

This is normally how sagas start, so brace yourselves.