Just a few days ago, it seemed like Torino were the only Italian club who were seriously interested in signing Lucas Torreira from Arsenal this summer.

But reports from the past 24 hours claim that the Turin side now have competition from AC Milan and AS Roma, and the race seems to be getting hotter.

Roma’s chase for the player had been reported by Tuttosport yesterday, and the newspaper brings another update today. They say that even though the rumour was denied by the club, there have been too many reports about it, making it hard to dismiss.

Mostly focused on Torino, Tuttosport says the club are not afraid of competition from the Giallorossi, and keep focused on finding a deal with Arsenal.

Torino’s idea is to get a loan deal with a buying clause which will be triggered in case some goals are matched. They have a five-year deal waiting for Torreira. 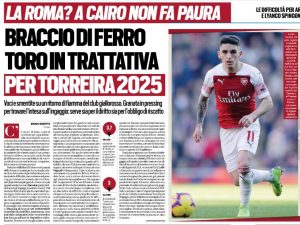 Meanwhile, Arsenal continue to demand €24m for the midfielder, which could be paid in two instalments, one now and another in 2021.

Now a third club seems to have joined the race, and that’s Milan. It’s Sky Sports who brings the news, saying the Rossoneri are back for the target who they had already tried to sign last year.

It’s said the Italian giants have now made the ‘first contacts’ with Arsenal and are in touch with Torreira’s entourage. The costs are considered to be ‘very high’.