Thomas Partey has 24 La Liga appearances for Atletico Madrid this season. That means he’s played in all but four of the matches.

However, nine of those appearances were as a substitute and there’s long been a theme in the Spanish media that Thomas doesn’t think he’s valued enough at Atletico.

Last week, Marca had an article claiming several, at that time unnamed, Premier League clubs are interested in signing the player.

Today’s edition of AS talks of offers from Italy and interest from English clubs, with Arsenal and Manchester City getting a mention.

That said, the claims don’t sound strong at all. It’s stated Man City and Arsenal have been linked the most with Thomas, but AS don’t sound confident in there being concrete interest.

Premier League clubs are said to be aware that the footballer would suit the league ‘perfectly’. 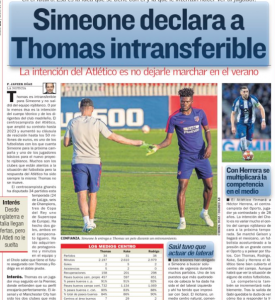 Meanwhile, Atletico are determined to keep him, and just like every year, it’s stated next season will see much more importance for the midfielder.

A lot could depend on the player, especially given he has a €50m buyout clause.

That figure would be no issue for Manchester City, and certainly reachable for Arsenal.