Mohamed Salah’s contract with Liverpool expires at the end of next season, and that’s naturally seen some worry about the attacker’s future, or otherwise, at Anfield.

Given his status as one of the best players in the world, Salah has been looking for a bumper new deal, and the Premier League club have been hesitant to offer what the player and his agent think would be a fair amount.

That’s seen Barcelona linked with the Egyptian, and Salah has been considered as an alternative to the likes of Erling Haaland. Sport, a Catalan newspaper, now report that the Blaugrana are giving up, because it’s looking likely that the player will renew with Liverpool.

They say ‘things have taken an unexpected turn’, and Salah’s future has been ‘turned upside down’, with staying at the Reds now seeming much likelier than it was just a 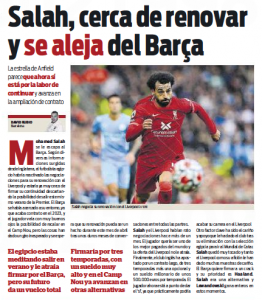 The player is ‘about to say yes’ to Liverpool, and continue his career at a club where he’s made himself a hero, now set to build his legend further.

Barcelona will have to look elsewhere.