Home Europe “Things have slowed” down for Barcelona to complete transfer after club’s latest...
SHARE

Clement Lenglet was seen undergoing medical tests at Sevilla on Tuesday, prior to their start of the pre-season preparations.

Sport claimed on Tuesday that the La Liga winners were ready to pay €5m more than his release clause to bring the centre-back to Camp Nou.

The Catalan newspaper mentions Lenglet’s release clause is €30m. Mundo Deportivo, on the other hand, claims the figure is €35m.

Today’s edition of Mundo Deportivo claims Lenglet will have to wait for a few days before he can complete a switch to Barcelona. This is because Sevilla are reluctant to lose their star defender and have set a new condition to let him leave.

The report now claims Sevilla will only allow the 23-year-old leave the Ramón Sánchez Pizjuán if Barcelona decide to pay his release clause in one go.

Sources close to Mundo have been told “things have slowed” down because the Spanish champions now have to change the payment structure in order to pay his €35m release clause. 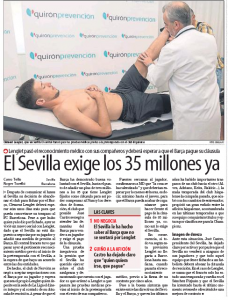 Sevilla president Jose Castro has made it clear that he does not want his star players to leave the club after the end of a difficult campaign. The club will only let their players leave if potential suitors can meet the buyout clause.

On Monday, Sport suggested the deal could be announced that day, so this is very a step backwards from their fellow Catalan newspaper.