Newcastle United have reportedly sent officials to Lisbon in order to negotiate the purchase of the Sporting CP defender Ruben Semedo.

Newspaper A Bola has a story today saying the first offer has already been made, but it wasn’t enough for the Magpies to convince the Lions to sell.

The Newcastle emissaries are now expected to spend a couple of days more in the Portuguese capital to keep negotiating and trying to find an agreement.

Ruben Semedo has a €45m release clause, but according to the newspaper, Sporting will accept to sell him for a more reasonable price.

This story can be backed up by one Record published on Wednesday. They said Newcastle were indeed the first club to 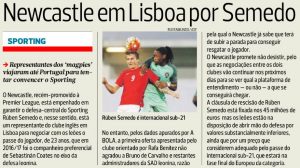 bid for Semedo, offering €12m plus €3m in bonuses.

Record also claimed that the offer wasn’t enough, and Sporting were expecting Southampton to bid, as Claude Puel’s side would be ready to put forward €20m for the defender.

But after these two articles, it makes us wonder: are Southampton really in this race or is Bruno de Carvalho using them to make Newcastle raise their offer?