Everton are in contact with Lazio for Joaquin Correa, according to multiple reports coming out of Italy.

Local outlet Il Messaggero have a report on Lazio’s pending business this summer, and the forward is mentioned when discussing potential outgoings.

It’s claimed the Serie A side are in contact with Everton over the 26-year-old’s transfer and they even state the agent is expected to arrive in Italy, bringing with him ‘important and definitive’ offers.

Il Messaggero claims are also echoed in Friday’s edition of Il Tempo, where it’s said that Inter Milan could look at the Argentina international if and when they sell Romelu Lukaku to Chelsea. 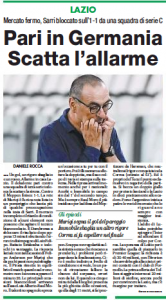 Correa excelled under Simone Inzaghi’s orders when the coach was managing the Italian capital club, and he could lure him to the San Siro, but Lazio sporting director Igli Tare hopes to place the attacker in the Premier League.

Everton have ‘already made first contact’ with Biancocelesti and their ‘first offer’ is around €20m.

The offer is ‘still low’ because the fee requested by Lazio is around €35-40m, but Il Tempo explain ‘there is room to negotiate’.