Home Europe “There’s not even negotiations” – No agreed deal for Rangers player, no...
SHARE

It would appear the rumours around Rangers striker Alfredo Morelos have again got a little carried away. Not for the first time, a report comes from Portugal to state that the transfer isn’t as advanced as had been reported, and FC Porto aren’t even making any real attempts to sign the Rangers player.

Record states ‘Morelos opens the door’, but they make it clear Porto have so far done nothing concrete about it. A source close to the player has told the Portuguese newspaper there’s been no proposal to Rangers from Porto and “There’s not even negotiations”.

Morelos would be attracted to Porto because he can play in the Champions League and fight for titles, following other Colombians who have been at the club.

Claims of a €12m (plus €5m in bonus payments) offer from Porto to Rangers are dismissed as simply a rumour. Morelos, according to the source, has only been the subject of contact from clubs in England, Italy and Russia, and none of those were clubs qualified for the Champions League. 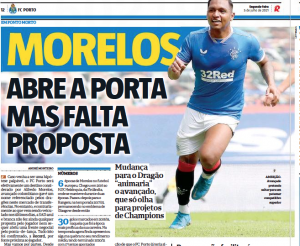 Therefore, the Rangers player isn’t keen, and this could be a case of Alfredo Morelos wanting Porto, but the Liga NOS side not rushing into things.