On Friday we brought together an update on the Jerry Mbakogu situation.

GazzaMercato, a more rumour driven cousin of Gazzetta dello Sport, reported Leeds United had a move all set for the summer for a transfer fee of €5m including bonuses.

Previously figures of €4-7m had been claimed, so €5m is slightly at the lower end of the spectrum.

Whilst similar had been claimed several times, with the Carpi striker being edged towards Elland Road from the last week of January, this time there was an interesting addition.

It was claimed Lorenzo Tonetti, an associate of Andrea Radrizzani, had been working as an intermediary to get the transfer done, another indication Leeds managers don’t pick all their signings. 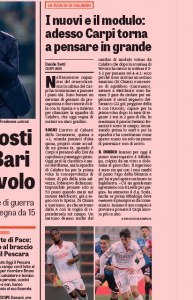 Saturday’s edition of Gazzetta dello Sport being confirmation from Carpi, with their general manager Matteo Scali quoted as saying: “There’s a gentleman agreement with Leeds for June.”

That’s as good confirmation as can be provided.

Paperwork still needs to be sorted out, and Mbakogu now has time to get his Italian passport sorted out, negating the need for a work permit prior to his Leeds United move.