Wednesday’s edition of O Jogo has a big story about Wolves and a Sporting player.

The Premier league club have a long record of signing from Portuguese sides, and it will be no surprise if they do so again in the summer transfer window. Wolves don’t scout in Portugal as much as some other English rivals, tending to identify players via manager Nuno Espirito Santo or through agent connections.

O Jogo’s story is about Rodrigo Fernandes, who is predictably represented by Jorge Mendes’ agency Gestifute. It’s claimed ‘there’s been conversations’ already between the parties involved, and the Portuguese newspaper presents this as a serious attempt.

There’s already figures ‘on the table’, of €10-12m, and it sounds like Wolves are evaluating the cost and structure of a deal before going in for the kill. 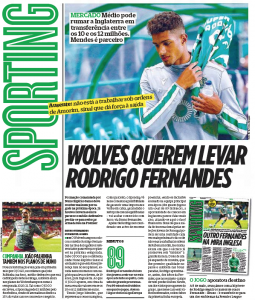 From Sporting’s perspective, they would welcome the cash. Rodrigo Fernandes is highly valued by the Lisbon club, but they need to bring some money in and the midfielder is an option.

At just 19 years of age, the youngster is yet to really breakthrough to Sporting’s first team, so they wouldn’t lose much in that regard.