It’s not too unkind to say Felipe Anderson’s temporary stay at FC Porto hasn’t been going too well.

The Brazilian was out of David Moyes’ plans at West Ham this season so a loan was felt to be the best option. As far as loan moves go, managing to secure one with a big club capable of titles, and one which is in the Champions League, is very fortunate.

Felipe Anderson had the chance to relaunch his career, however, there were quickly suggestions in Portugal that he’d not been showing the greatest enthusiasm, and he was reminded that a move to Porto cannot be viewed as an extended holiday.

Juliana Gomes, the player’s sister and also his agent, then spoke to the media and said the loan had been arranged by previous agents and that she’d seek a meeting with Porto.

Inevitably, that saw the drama rise and there was even talk of an early return to West Ham.

Porto manager Sérgio Conceição has now looked to calm the situation, quoted by Record as saying: “I don’t like to individualise, but Felipe Anderson has been working very well. As far as training is concerned, there is absolutely nothing to say. These two weeks of 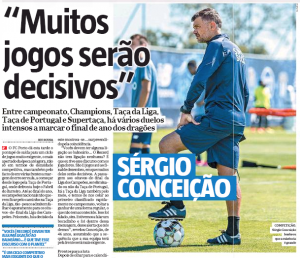 work were important and Felipe was also included. It depends on his ability to put in training what I want so that he is visible in the game, but of course I count on him.”

The real answer will come when Porto next play, and whether the West Ham man is in the team. Should he not be, and that situation continue, then further questions about his future are inevitable.