Home Europe ‘There is always Leeds’ – Next week can be ‘decisive’ in transfer...
SHARE

Cagliari’s Nahitan Nández is currently on vacation following Uruguay’s elimination from the Copa América at the hands of Colombia.

Prior to the clash against Colombia last weekend, the midfielder was quizzed about the recent rumours linking him with a move to Leeds United. The Whites have been regularly named as one of the contenders to sign the 25-year-old this summer.

On July 3rd, Centotrentuno explained Marcelo Bielsa’s side are in the front row to land the Uruguay international.

La Nuova Sardegna now state the Serie A side have to ‘decide the future’ of Nández and his compatriot, Diego Godín, once they return from vacation. 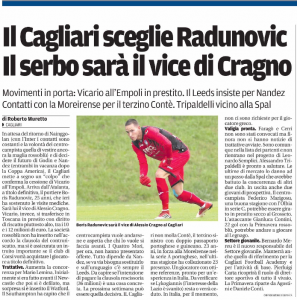 American is sold in this window.

On Nández, the report adds ‘there is always Leeds’.

Nández has three years left on his contract that also includes a €36m release clause.

According to the newspaper, next week will be ‘decisive’ to find out whether the English club have a concrete desire to pay the fee needed to secure the player’s signature.