As the race for the Porto youngster Diogo Queirós continues, it seems we’ve had a little change in the list of English pretenders for the defender.

During the past few weeks, we’ve been covering a few reports saying that Bournemouth and Liverpool would be the clubs who are trying to take him to the Premier League.

But in a story from newspaper Correio da Manhã on Thursday, it’s claimed that it’s actually Arsenal who are alongside the Anfield Road side in the race.

The outlet says Arsenal and Liverpool could be making a ‘tempting offer’ in the next few days, after following the youngster for a ‘long time’. 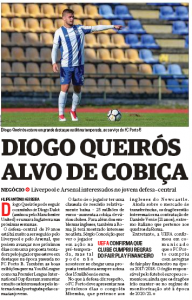 Diogo Queirós is seen as an easy target because of his €25m release clause, and it turns out that he could be cheaper than that.

Correio da Manhã claims that Porto will analyse offers of at least €15m. The numbers can obviously grow with this auction, also because Roma are said to be interested in the defender.

With his contract running until 2021, the 19-year-old is still to have a chance to make his official debut for Porto.