On Saturday, we covered claims from Portugal that Newcastle United have made some sort of proposal for Nico Castillo, a Chilean striker who currently plays for Pumas in Mexico.

That was then somehow twisted elsewhere into Newcastle United making a £7m offer and being favourites to sign the player.

To be clear, that was not claimed in any Portuguese report, and the Benfica route looked the likeliest from the start.

Sunday’s edition of Correio de Manha reports Benfica are on the verge of completing a deal to sign Castillo for €7m, and the 25 year old will receive a five year contract. 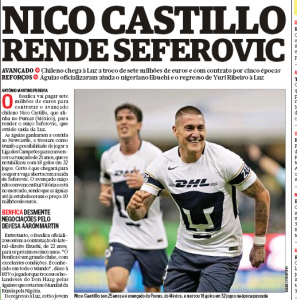 Newcastle United get a mention, but it’s stated Benfica have won the race, able to push Rafael Benitez’s club aside with the temptation of playing in the Champions League.

South American players moving to Portugal is a tried and tested formula which has seen many greats then go on to play for some of Europe’s biggest clubs.