Polish teenager Oliwier Zych is set to make a switch to Aston Villa, according to Przegląd Sportowy.

The 15-year-old is currently part of Zagłębie Lubin’s youth system, having joined them from Arki Gdynia in 2018.

Tuesday’s edition of the newspaper states talks between the Premier League side and Zagłębie Lubin for the young goalkeeper’s signing are at an advanced stage.

It’s claimed the custodian’s move to Villa Park is close to being finalised and he ‘will fly to England’. The latter part of the information is mentioned in the headline, but the same isn’t backed up within the report.

Zych will turn 16 on June 28th and he could travel to the United Kingdom after this weekend. The youngster is likely to join Villa’s academy. 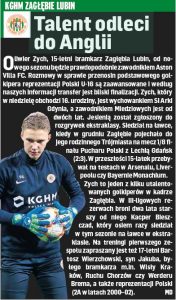 Przegląd Sportowy also add the Poland U16 international, who is one of the most talented goalkeepers in the club’s academy, has had trials at Arsenal, Liverpool and Bayern Munich in the past.

Zych has not made his debut for Zagłębie Lubin’s first team, but he was on the bench for two Polish Cup games in 2019.