PSV Eindhoven Yorbe Vertessen has publicly talked about his dream to play for either Manchester City or Bayern Munich in the future.

The 19-year-old has been at the Dutch club’s academy for the last 11 years and his performances for the youth team over the past few seasons were rewarded with an appearance for the first team last weekend.

Vertessen came off the bench and replaced Mohamed Ihattaren in PSV’s league win over FC Utrecht on December 12th.

Friday’s edition of Het Nieuwsblad explains the Belgium U19 international was ‘not completely satisfied’ with his debut performance for PSV’s senior team.

“I missed a few opportunities, which normally doesn’t happen to me often,” the teenager said.

Over the last two years, Vertessen has been battling with injuries and it became so severe that his appearances with PSV’s youth side were restricted to 10 games last season.

When discussing about his future plans, he talked about staying fit and also the dream of moving to City. The newspaper states Vertessen sees PSV as an ‘intermediate station’ to help him get a move to a big club like City or Bayern. 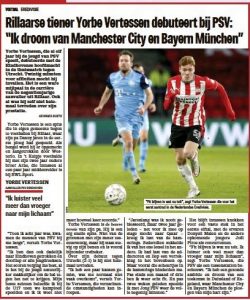 “I have a healthy ambition and dream of a future in Germany or England, where Manchester City and Bayern Munich are the teams of my heart,” Vertessen explained.

Vertessen’s contract with PSV is until 2022 and his immediate focus will be to get more opportunities with the first team and also impress with his performances.