Days after defeating Liverpool to clinch their third consecutive Champions League trophy, Zinedine Zidane stepped down as Real Madrid manager. The Frenchman’s decision to leave the Spanish club has seen the 13-time European winners focus their efforts on appointing his successor.

According to Marca, Tottenham Hotspur manager Mauricio Pochettino was the main target for Real Madrid. However, the La Liga outfit are aware that it would be a complex task to sign the Tottenham boss, just weeks after he signed a new deal that will keep him at the north London club until 2023.

So far, Pochettino is still the first choice to replace Zidane at the Santiago Bernabéu. Liverpool manager Jurgen Klopp is second in the list of targets for the European champions, and Germany coach Joachim Low and Juventus boss Massimiliano Allegri have backed away from the opportunity to manage Madrid.

Pochttino is committed to Tottenham until 2023, a year more than Klopp’s current contract at Anfield, and Allegri is contracted until 2020 with Juventus, so Marca points out Madrid will have to pay compensation for any of them.

Real Madrid will now be forced to call the leaders of Spurs, Liverpool and Juventus and find out if they are willing to negotiate. Pochettino is in no mood to spoil his relationship with Daniel Levy, and the Tottenham chairman shares a good relationship with his counterpart, Florentino Perez. 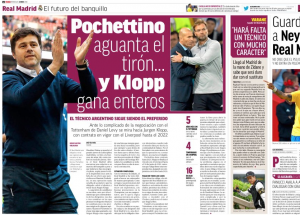 The alternative to Pochettino is Klopp and the German’s contract and Liverpool’s desire of retaining him make that difficult too. The Reds are obviously unwilling to let go of their current manager.

Marca claims tough negotiations lie ahead for Real Madrid, and it’s stated their leaders will find a suitable time to sit down and talk with Tottenham’s Daniel Levy and Liverpool’s Tom Werner.