Home Championship Talks open for Nottingham Forest transfer, could ‘drag on for the entire...
SHARE

Liga NOS side Estoril have reportedly opened negotiations with Nottingham Forest for the transfer of Licá.

The player has already spent the last six months on loan at the Portuguese side, and according to local reports, he wants to remain there.

But as reported by O Jogo today, it won’t be easy. The talks have been tough for many reasons, and one of them is that Nottingham Forest haven’t yet even decided if the player should leave on another loan or a permanent transfer. 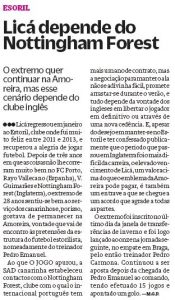 That’s why the newspaper claims the negotiations could ‘drag on for the entire summer’. Licá’s salary is also a problem, and his wages in England are too high for Estoril’s reality.

The player only managed one goal and one assist for Estoril during his spell, but these stats are still better than those from the first part of the season at Forest.

As Licá only signed a two-year deal when joining Forest in 2016, the club also need to sort his situation before loaning him once again, otherwise he could leave for free next year.