A mere day after Tuttosport got Manchester United fans mildly excited about the prospect of Leonardo Bonucci swapping Milan for the north of England, Gazzetta dello Sport come in and ruin the fun.

The Italian newspaper have a long article on what AC Milan’s transfer window could look like, and they’re adamant there are at least four players in Gennaro Gattuso’s squad who aren’t going anywhere.

Among them happens to be the veteran defender, as Gazzetta make their readers aware of the rumours sending him to the Premier League, but make it clear that, as far as they know, there’s nothing to back them up.

Tuttosport’s idea was that selling Bonucci on to Manchester United for around €40m (after an initial loan) would allow them to ‘further amortise the cost of Bonucci and increase the amount of capital gain from a deal’. 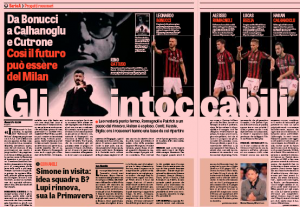 While the Red Devils could probably do with a new centre-back, this always seemed like a wild claim from the Turin based newspaper.

Gazzetta, whose headquarters are in Milan, didn’t take long to push it to one side.