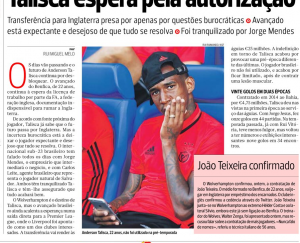 If you think that Paul Pogba is the most boring saga of the summer, that’s probably because you haven’t been following Anderson Talisca’s move to Wolverhampton properly.

The €25m move has been said to be agreed for several weeks, but it isn’t happening for many reported reasons. This time, A Bola are going with the work permit problem.

The player is reportedly still waiting for the Football Association to sort his visa for over a week. According to A Bola, his agents Jorge Mendes and Carlos Leite have been calming him down and saying everything is going to be fine.

Talisca has been missing all the Benfica games in pre-season as he waits for the transfer to be sorted.

Although the deal is said to be done, the Portuguese papers insist on saying that he could end up going to another club. The 22-year-old would still have hopes of joining Liverpool, who are reportedly the most interested club from the Premier League, although that’s got to be doubtful.

This Talisca case is really a mystery. Some papers said he didn’t want to join a Championship side, and others claimed that he hadn’t agreed a salary. It looks like Mendes is forcing this move to England to happen, but despite the agent’s super powers, he still can’t convince the FA to give the player a work permit.