Earlier today we covered claims from Italy that Ashley Young has reacted favourably to interest from Inter Milan.

Gazzetta dello Sport have their own article on the situation and explain Antonio Conte’s side have turned their attention to the Manchester United player having found Chelsea’s demands for Marcos Alonso and Emerson Palmieri to be too high.

Young’s ‘candidacy’ has been ‘taking shape in recent hours’, and the Italian newspaper states he ‘seems interested’ in a change given he’s not getting regular football at Old Trafford.

That Romelu Lukaku and Chris Smalling have done well since their moves to Serie A is seen as a sign for the player, but also for Inter as it gives some value to players leaving United for Italy.

Interest between Young and Inter ‘is mutual’ and it’s explained that can only help in negotiations. 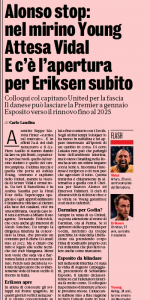 Manchester United aren’t really in the shape to lose players right now, clearly needing to add to their squad pretty much immediately.

That it’s eight days into the transfer window and the need is so clear, yet no signings appear close, must be worry for fans of the Premier League club.