Arriving from Club Brugge on a free transfer over the summer, Swansea’s Simon Paulet is slowly adapting to English football.

The 18-year-old midfielder has spent all of his time with the Swans’ U23s, playing three games so far, which he’s very happy with.

However, he didn’t move to Wales to always play reserves football, as the youngster has lofty ambitions for the future, which include giving Graham Potter a headache as quickly as possible.

Speaking to La Nouvelle Gazette in Belgium, he said: “The aim is to impose myself and become a professional here. Maybe I’ll get a chance to train with the first-team at some point this season, we’ll see. 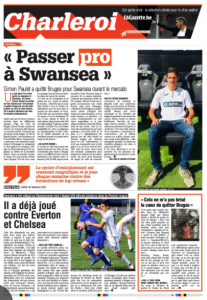 “The average age of the first-team here is just 23, and two reserves players have already moved uo this season. There are real opportunities here. With the relegation, the club decided to sell many of their best players and are now counting on the youth.”

The club’s mentality is the main reason why he chose to move to Swansea rather than stay in Belgium, despite a few sides giving him the chance of going straight into their professional group.

He continued: “It’s a different world here. The training centre is incredible, and I play every week against top level teams. Honestly, you can’t compare it to Belgium.

“Here, we’re at the club from 8am to 4pm. Every day we have meetings, especially to analyse our opponents. We spend many hours in the gym”.

A box-to-box midfielder who enjoys attacking as much as he likes defending, Paulet doesn’t regret his choice in the slightest, and has found his integration quite easy thanks to his ability to speak Dutch, with three teammates also fluent in the language.

Describing Swansea as a ‘family club’, he feels far more comfortable than at Brugge, where his relationship with his manager deteriorated over the last year, even if he doesn’t know why exactly.

Either way, that’s in the past for him, and now he’s solely focused on his future.