Contracted to Swansea until 2018 and currently on loan at Marseille until the end of the season, Bafétimbi Gomis is going to have to make a rather important decision come the season’s end.

With the Ligue 1 side unlikely to give him the big contract he needs at this time in his career, wanting to focus on other, younger, targets instead, a move away from the Swans will undoubtedly be needed for the former France international.

Unless Paul Clement has plans for the 31-year-old (which we doubt), Swansea will want Gomis off their wage budget for next season, and Le10 Sport reveal a few Chinese clubs are after his services. 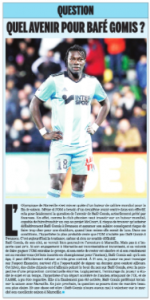 The French magazine reveal the Swansea loanee received offers during the January transfer window, which were looked at by his representatives, but Gomis decided to finish his season in the south of France, as he strives to have his best ever campaign in France with the Ligue 1 side.

However, were those offers to return in June, it seems unlikely the striker will turn them down, especially if Marseille refuse to match his demands.

On a loan without a view to buy, the French club would have to negotiate a whole new transfer with Swansea, and with Andoni Zubizaretta also looking elsewhere to bolster Marseille’s frontline, gambling on an ageing Gomis seems like an unlikely move, regardless of his track record this season.

Everton suggested as interested party should midfielder be available – Ancelotti...