In 2016, Swansea City signed Borja Bastón from Atletico Madrid for a club-record fee.

The striker struggled in his debut season with the Welsh club and was loaned out to Malaga the next summer, where he failed to impress during his temporary spell.

Before the start of this campaign, Alaves took the Madrid-born player on a season-long loan deal and the La Liga outfit have an option to make his transfer permanent after this campaign.

Borja has scored four goals in 18 league appearances, which includes 10 starts and he is the second choice striker behind Jonathan Calleri. After struggling for two seasons, the frontman is on the right path to regain his best form at Alaves, where he’s currently enjoying his life.

Friday’s edition of Catalan newspaper Mundo Deportivo has gathered comments made by the player, in which he expressed his desire to continue with the Spanish club beyond this season. 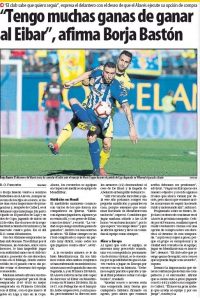 “Here I am super comfortable, because the group is exceptional and the city is overjoyed with the team; Playing in Mendizorrotza [Alaves’ home ground] is incredible,” Borja said.

“The club knows that I want to continue [at Alaves]; another thing is that an agreement must be reached.”