As stories go, Swansea City’s Sung-Yong Ki to AC Milan wasn’t one we ever thought we’d end up writing, but it’s a thing according to Saturday’s Corriere dello Sport.

The Italian newspaper dedicate a whole page to the affair, and it’s the fact the Korean midfielder is out of contract in the summer that’s really intriguing them.

With the Swans currently in a relegation battle and with no assurances of staying in the Premier League next season, and having never played outside of the United Kingdom since arriving at Celtic from FC Seoul, a change of air could be on the cards for the 29-year-old. 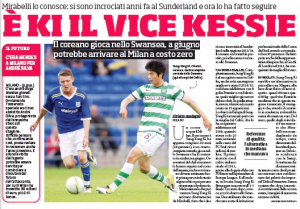 For AC Milan, it’s all about a bargain, but also filling a gaping hole in their squad: Franck Kessiè’s backup.

The Ivorian has started all but five of his team’s games this season, already racking up over 3000 minutes of football, and the arrival of Ki would allow Gennaro Gattuso (or whoever is in charge next year) to give their starlet a rest from time to time.

The Swansea midfielder, with his imposing physique, would suit that role perfectly, hence the interest.

We’ll have to wait and see if this is just one of those random rumours that pop up for no reason, but, for now, we’re just putting it in our database.