Home Premier League Transfer could depend on Swansea survival, playing for Paul Clement in PL...
SHARE

Takvim have reported Swansea City are awaiting an offer from Fenerbahçe for their striker Bafetimbi Gomis. The Frenchman is on Fenerbahçe’s short list for next season, with the Turkish club looking for a new striker to replace Emmanuel Emenike and Fernandao.

It’s also been claimed Fenerbahçe officials are waiting to see if Swansea City’s remain in the Premier League for next season. The Welsh club currently lie just above the relegation zone, and have the edge over Hull City with just two games remaining.

Fenerbahçe are hoping Swansea City will do them a favour by allowing Gomis to sign for them on the cheap because the Turkish club are in serious trouble with FFP. 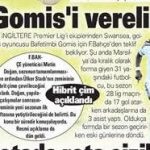 If Swansea City stay in the Premier League then 32 year old may look to force himself into the plans of manager Paul Clement.

His goalscoring record at Marseille means he is back to his best and interest for in his services will be high if he doesn’t return to Swansea City.

Marseille are keen too and the more interest there is, the better it is for Swansea.