Roque Mesa’s dream of returning to Spain on a permanent transfer is set to become a reality after Sevilla decided to exercise the purchase option in signing the midfielder.

Mesa joined Sevilla on loan in the mid-season transfer window and the La Liga outfit having an option of signing him on a permanent deal. Mesa had earlier expressed his desire to continue at Sevilla beyond this summer.

Mundo Deportivo now claims that Sevilla are ready to pay the transfer fee to Swansea to secure the Canary Islands-born midfielder’s future beyond this season.

Swansea will earn €8m plus €2m in add-ons from Mesa’s sale and the player will sign a three-year contract at Ramon Sanchez Pizjuan. 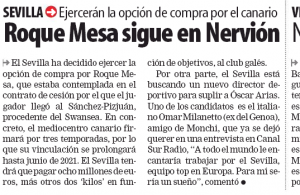 There’s something not quite right here. This is Sevilla, they don’t simply agree to pay clauses without trying every trick in the book to get them down. The club have a long, and maybe even proud, history of these things, making it all sound too good to be true for Swansea.

Either the reports are inaccurate, or Sevilla have changed some of their ‘transfer tactics’ since Monchi left the club for Roma.