Home Championship Zinho Gano and his agents in talks with Swansea and Stoke, looking...
SHARE

According to a claim in the Belgian media, Swansea City and Stoke City are showing an interest in KV Oostende forward Zinho Gano.

The 24 year old could leave the Jupiler club this summer due to his high wages, and the two Championship sides are said to be in the mix to sign the player.

HLN today report KV Oostende are looking to offload Gano in this transfer window, just 12 months after signing the player from Waasland-Beveren.

It’s claimed both Swansea City and Stoke City have held talks with Gano’s agent and his club are looking to sell him for €2.5m, the fee they bought him for last summer. 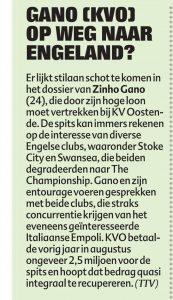 With their relegation to the Championship, Stoke City and Swansea City are expected to lose key players and will be looking to rebuild their squads.

Gano seems to be an option for the two clubs, but they will face competition from Serie B side Empoli.