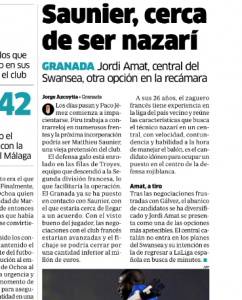 Swansea City have been incredibly busy with transfers over the past week, and it looks like the business is set to continue.

The next possible transfer is outwards, and Spanish newspaper Marca say on Thursday that Jordi Amat has become a serious option for Granada. Having tried a few other options, Granada are becoming frustrated, and Amat could be the solution.

Marca explain that Amat doesn’t fit into the current plans at Swansea City, and has therefore decided an exit may be the best plan. The Spanish newspaper believe Amat would prefer to go back to his own country in search of minutes on the pitch.

It sounds like Granada and Amat may well be made for each other, and Swansea are set for further transfer talks, this time with another Spanish club.