Roque Mesa to Sevilla could be announced at any point today, with everything agreed on a loan and the player already in Spain.

It may well have been the plan all along, with repeated claims in the Spanish media that Sevilla was the club Mesa really wanted to join, even before he moved to Swansea City.

Marca have an article on the Mesa move in their Monday edition, and kick it off with: ‘It has taken him a year and a half to achieve his goal of feeling like a Sevilla player.’

Monchi had tried to sign Mesa from Las Palmas, with the player himself very keen, but the Canary Island club wanted more than Sevilla were willing to pay and negotiations broke off at €8m.

Marca say Swansea City then paid €12.5m for the player, but he wasn’t able to settle in the Premier League.

In Spain there sounds no surprise about that, like it was almost inevitable before Mesa even arrived that he wouldn’t be long in English football: ‘It is not a style that fits in the qualities of the pivot.’

Sevilla win, getting a player on loan who they’ve been trying to sign for a while anyway. Should the deal be made permanent, with the expectation it will be, the Spanish club will probably end up paying around the €8m figure they wanted, although there’s no buying option disclosed yet. 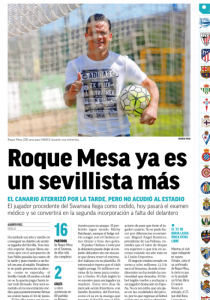 Mesa will win, he’ll have received a bank account boost with Premier League wages, something that will likely see him earn more in Sevilla than he would have moving straight from Las Palmas.

The only losers here are Swansea City, who perhaps should have thought more about Mesa’s suitability for English football and whether the player would be completely willing and able to settle.

A brief six months in Wales, a lot of money, and joining the club he wanted to anyway.