A Swansea City player is on the front page of Portuguese newspaper Record today, as they bring news about a big transfer.

Ironically, this is a move that shouldn’t have any effect on the Premier League club in the next season, because it’s about Renato Sanches.

The Portuguese midfielder, who’s currently loaned by Bayern Munich, is set to leave Swansea City at the end of the season, and now Benfica are apparently interested in landing him.

According to Record, the Eagles have already started contacts with Jorge Mendes to bring the 20-year-old back to the club, with the player also keen on returning to the Lisbon side. 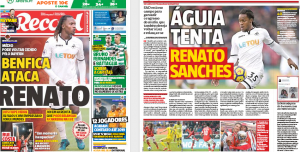 Renato Sanches moved from Benfica to Bayern Munich in a €35m deal back in 2016. With a disappointing season in Germany, he was sent on loan to Swansea.

But things haven’t worked very well for him in the Premier League either, and with only 15 appearances for the Welsh club, the possibility of staying isn’t even taken into consideration by the media.

The youngster now reportedly hopes he can relaunch his career at Benfica, with the Portuguese side believing they can use his potential to bring him to a top level once again. Benfica’s intention is to sign him on a loan without a buying option.