Fanatik report talks between Fenerbahce and Swansea are progressing over the transfer of Luciano Narsingh and the Turkish club are hoping to confirm his arrival in the near future.

The Dutchman has been strongly linked with a move to Fenerbahce, since his former PSV boss Phillip Cocu took charge of the Turkish club, and Fanatik say the deal is now very close to being completed.

According to Fanatik there are only a couple of minor issues that need to be addressed and then the player will fly to Turkey for a medical. 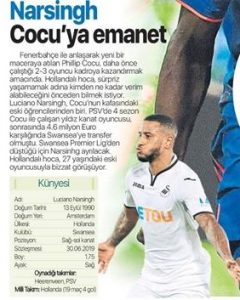 We recently covered the reports from Turkey that Cocu wants to work with Narsingh once again after the pair had over three years together at PSV.

After Swansea’s relegation to the Championship it seems the 27 year old wants to leave the club and Fenerbahce are ready to offer him that chance.

Narsingh only has a year left on his Swansea City contract.