Swansea City scouts seem to have made some interesting moves over the weekend. As reported by Portuguese newspaper O Jogo, club officials were present at two different games this Sunday.

The Premier League side had emissaries in the North of Portugal watching Porto’s 4-2 win over Vitória de Guimarães, and also Benfica’s 2-0 away win over Moreirense.

With Carlos Carvalho’s arrival at the club, Swansea seem to finally have eyes in Portugal, a place where the big English clubs continue to have scouts week after week. 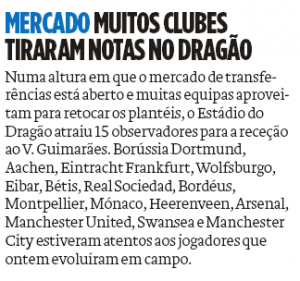 What the Swansea scouts saw were two protocol wins. No big surprises for Benfica, with the likes of Douglas, Cervi, Krovonovic and Salvio excelling, while for Porto, Danilo, Marega, Aboubakar and Brahimi had another great game… again.

It’s interesting that, with Carvalhal only signing a deal until the end of the season, it’s not like Swansea will consult him for long-term targets for the club.

So maybe they are looking for a quick fix in the January market, even though the manager has just claimed he has no Portuguese players on his list.