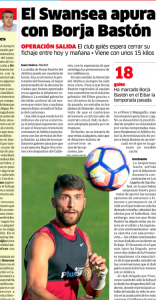 Last week the Spanish media, having been first on Fernando Llorente, started to send another goalscorer to Swansea City. There’s been all sorts of claims on where the Borja Baston deal currently is, so it’s worth going through Marca’s Monday explanation.

The Spanish newspaper says Borja’s Atletico Madrid exit could be ‘a matter of hours’ away. It’s explained that ten clubs have been interested in signing the player, which is no surprise given his goalscoring record.

Marca say Swansea have decided to accelerate things, so today or tomorrow should see the 23 year old leave Spain.

Despite previous claims of an agreed fee, Marca say that only today will the official proposal be made, of around €15m. Swansea are said to be close to a deal, but Marca point out two other clubs from the Premier League are standing by, prepared to swoop at any sign of the deal wobbling.

They don’t name those clubs, but West Brom have been linked with Borja recently, and there were claims earlier this year that Tottenham Hotspur were very close to a deal.